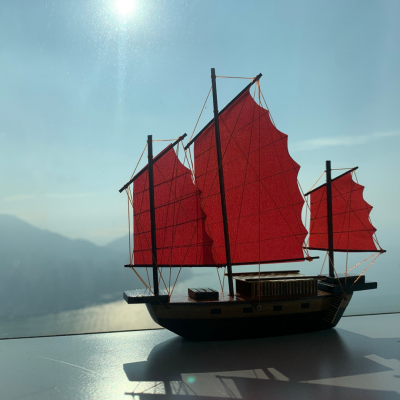 The junk boat is a unique type of sailing boat in China, and it is said that it already existed in the Han Dynasty in 200 BC.

After improvement and evolution, it was still active in the coastal waters of China until the beginning of the twentieth century, mostly used for trade and transportation. It was first recorded in ” Nanzhou Yiwu Zhi
” in the Han Dynasty. According to the description of the book, the Chinese sailing ship in the Han Dynasty designed four sails, not directly facing the wind, but facing the windward side horizontally and slightly.

This enables the ship to move at high speed even in the case of headwinds, without the need to lower the sails like Western sailboats. Regarding the material of the sail, it is a rigid tent reinforced with bamboo poles. The largest ship at that time was 20 meters long and 10 meters wide, and could accommodate about 700 people or more than 260 tons of cargo.

After improvements in the Song and Yuan dynasties, Chinese sailing ships appeared in large numbers in the coastal waters of China from the 15th to the middle of the 17th century. In modern Hong Kong, a large number of them were used as fishing boats. Until the end of the 20th century, a large number of junk boats could still be seen in Hong Kong’s Victoria Harbour.

There are no reviews yet.

Only logged in customers who have purchased this product may leave a review.